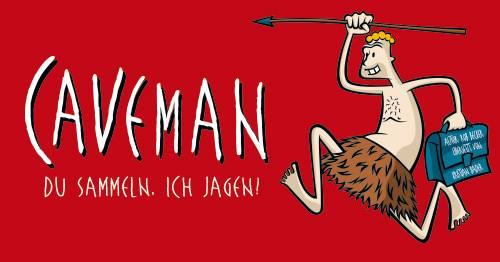 CAVEMAN – YOU COLLECT, I HUNT!

Two hundred thousand years – and a few more on top: since the beginning of mankind, man and woman have passionately tried to master everyday life together. Or even to lead a partnership.

But it is only in the current millennium that CAVEMAN provides the charming proof that the fundamental challenges of a relationship have not changed significantly, even in times of the 3-room cave of ownership and the hunt for smartphones. Because even civilization and progress could not change one thing:

This is an insight rich in relationships, but thanks to the likeable hero Tom, it provides pure pleasure. Together with him, the audience explores the unequal territories of the two species. On the one hand, there is the clearly manageable world of  remote controls and rolling territories with remote-controlled central locking. On the other, that extraordinarily complex universe of best friends, unbridled imagination, and baskets full of information. For example, we learn why HE wants television counted as work and SHE wants a clean bathroom without planning an operation on the open lung. In love, engaged, damn funny – CAVEMAN takes an entertaining and apt look inside every relationship.

Rob Becker’s original already became the most successful solo piece in Broadway history. And in this country, too, CAVEMAN has been an enduring hit on stage since 2000 in the production of Esther Schweins and the translation by Kristian Bader. Thanks to his pointed ingenuity and the loving processing of deep truths along with amusing clichés, CAVEMAN is more than ever a must for everyone who leads, leads or wants to lead a relationship. And turns the “mammoth-task relationship” into an unforgettably entertaining evening.

After seven years, CAVEMAN returns to where it all began. To the Stone Age? No, to Treptow. Arena Berlin is happy and wishes you lots of fun!