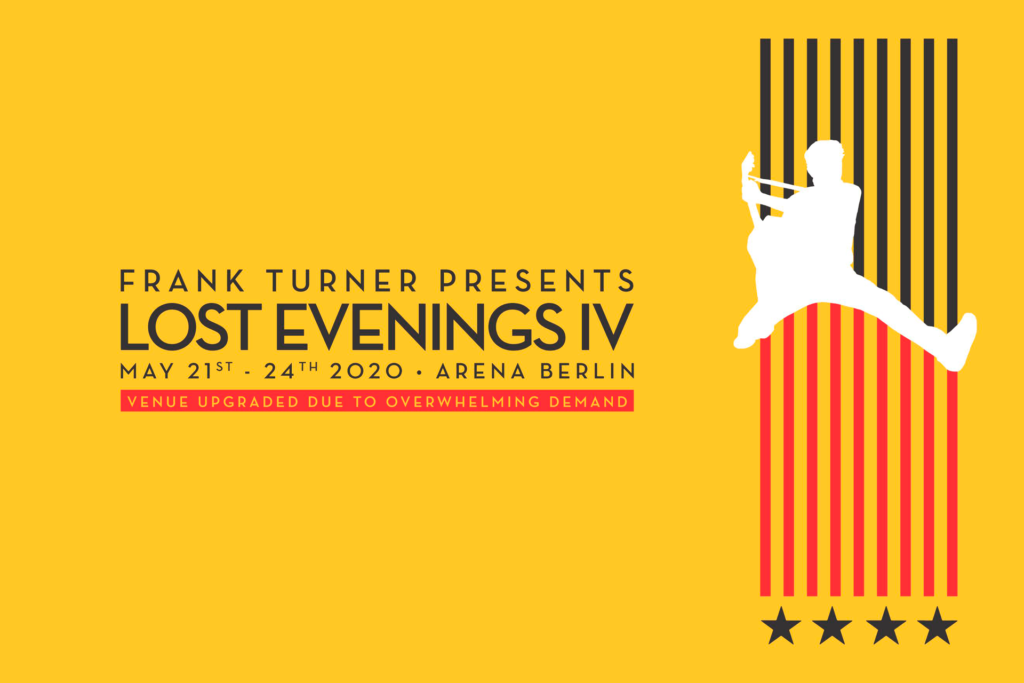 After last year’s triumphant sold-out event in Boston, USA, Frank Turner’s award-winning Lost Evenings Festival is now in its fourth year. This time the festival is coming to Berlin and will take over the Arena Berlin from May 21 to 24. The 4-day festival (winner of the AIM Best Independent Festival Award in September 2017) will occupy the many rooms, bars and outdoor areas of the Arena Berlin complex and present a packed and exciting program of events, lectures and of course live music.

As previously announced, Frank Turner will be headlining Lost Evenings IV with very different shows every evening: The “First Three Albums Set”, the “Solo Night”, an “Unplugged with The Sleeping Souls” and a “Greatest Hits Set”.
The main supports for each of these nights on the main stage can now finally be unveiled. On Thursday, May 21st, Frank will be accompanied by the Indie-Rock Brit Award winners Catfish & The Bottlemen. On Friday, May 22nd, the slot will continue in front of Frank’s solo set with a show by multiple award winners KT Tunstall. On Saturday, May 23, one of Frank’s greatest heroes and inspirations of all time will be on display: Henry Rollins is the main support for the unplugged set with Frank and The Sleeping Souls with his spoken word show. On Sunday, May 24th, the German punk rock band Turbostaat will then be the final main support for a rousing greatest-hit performance by Frank and his The Sleeping Souls, bringing the festival to a stylish close. Further support acts will be announced later.
The second stage, called Nick Alexander stage, will run simultaneously over the weekend. Named after the merchandising manager and longtime friend of Frank, who tragically died in the Bataclan attack in 2015, the stage will honour his memory by providing a platform for some of the best up-and-coming acts – personally selected by Frank Turner.
As in previous years, in addition to the evening performances, a selection of panels, master classes and workshops will be held over the four days, where leading industry insiders, musicians, experts and music professionals will provide the audience with inspiration, insights and advice. The full programme of events will be announced shortly.

About Lost Evenings IV, Frank says: “Lost Evenings 2017 was a vague, small, fine idea. To now be able to sit back and bring this event to the third city, in this unprecedented size, with a cast of this calibre, is a dream come true for me”.

The success of Lost Evenings has grown steadily over the past three years as the festival continues to build its reputation as an event with community and camaraderie at its core. The first two years were held at the London Roundhouse and surrounding Camden venues, and last year the festival made its international debut at the Boston House Of Blues. Every three years were sold out months in advance, the audience paid homage to each stage from start to finish and of course gathered again at the end of each evening to enjoy four very different performances by Frank.

4-day-tickets for Lost Evenings IV are now available for 125€ plus fees at eventim.de/event/lost-evenings-iv-frank-turner-arena-berlin and at all known CTS-VVK locations.