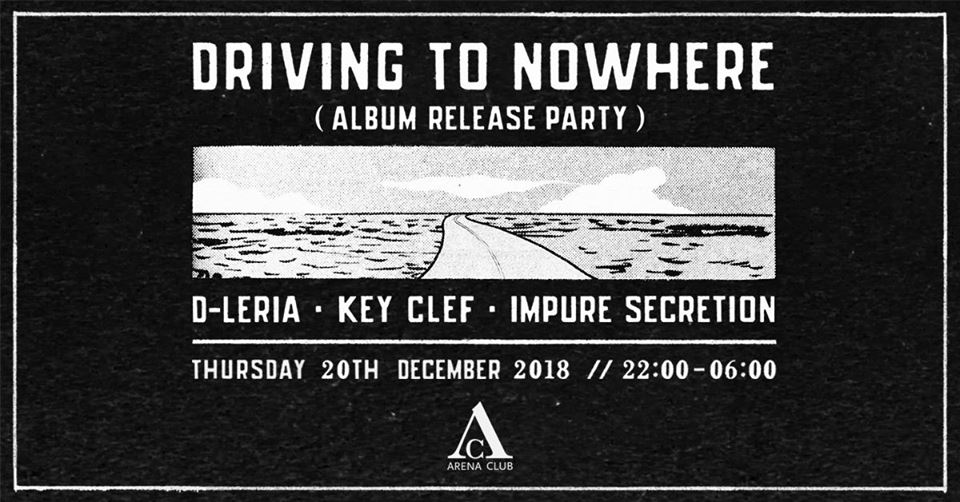 The long-awaited debut album ‘Driving to Nowhere’ of D-Leria is out and will be presented on the first event of Delirio in Arena Club. The label in coordination with the producer invite Key Clef and Impure Secretion, both upcoming artists of the label to join the night and celebrate the special album release!

The debut album of D-Leria ‘Driving to Nowhere’ is available on 12-inch vinyl format and is just officially released on December 10th on Delirio. With this release D-Leria inaugurates the beginning of the new DLP catalogue which will be dedicated to LPs, albums and other projects.
D-Leria returns after one year to the scene, releasing a collection of works produced between 2014 and 2018; ten tracks which mark a new beginning for the artist sweeping between heavy ambient excursions to hypnotic/ tribal techno, modernized and polished off in his own way.

Create chaos in the dancefloor, with a purely underground style and deeply inspired by parallel and psychedelic feelings. Compactness, depth and density of sound and much adrenaline going to merge into a propulsive progression, a classic sound but never granted. As a teenager he immediately begins to show a great interest in electronic music, beginning to collect a lot of Hardcore and Acid records. In 2003, he starts his career in the studio producing Hardcore, achieving international success and performing at major events and festivals. In 2014 he produces something different from the usual, something he had long desired for. And thus D-Leria came to life releasing several EP’s developing his new style, until joining the young label Delirio as both a musician and a manager, hosting artists such as Stanislav Tolkackev, Roberto Bosco, Plaster, Retina.it and more, with the aim of spreading a single message: the live recording.
Particularly interesting his live hybrid where, together with 2 turntables using various drum machines, manages to always create something new in real time, being able to completely rid, managing every single parameter, rhythm and melody with the use of its hands knowing how to use their imagination and pulling it out using instruments so different from each other. A mix of genres, groove, feelings that have in common the same adrenaline rush that you notice in each set and in its production.

Delirio was born in March 2017 from the free mind of a vintage comics enthusiast and sound researcher of the experimental sound, with the aim of spreading a single message: the live recording. The Berlin-based label has hosted artists such as Stanislav Tolkackev, Roberto Bosco, Plaster, Retina.it and more, with a unique agenda to record precisely produced live music, instead of laboring in the studio to achieve over-polished audio.