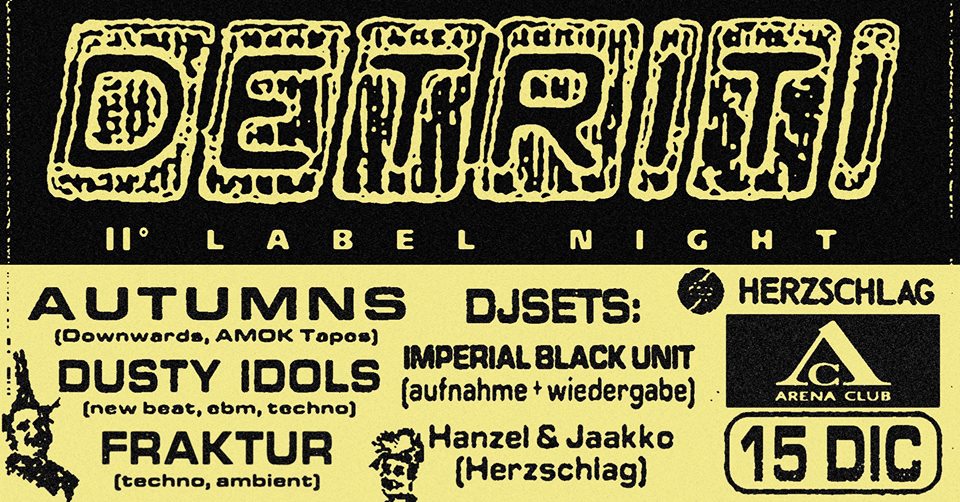 The second edition of Herzschlag & Detriti Records meltdown will be taking over at Arena Club on Saturday 15.12.2018.

Get down for a trip towards the darker, grimmer, edges of modern electronic music spanning between mechanical rhythms, cold beats and pitch-black melodies.

This time we’ll host two Detriti artists live: new beat, EBM act Dusty Idols and fresh atmospheric Techno project Fraktur from France. On top of that, the line up will be enhanced by Autumns who mixes EBM styled beats with lethal pulses and Industrial noises. Last but not least, Imperial Black Unit (aufnahme + wiedergabe) will join forces behind the DJ booth with Herzschlag resident DJs.

Detriti Records, the Berlin based creature of Davide Lace, it’s one of the most unique labels in the contemporary European underground scene.

Born in 2015, Detriti focuses on the experimental side of 80s underground music. Industrial, Acid House, EBM, Synthwave, New Beat, Darkwave are the main genres hosted by the label.

Limited editions‘ cassettes and vinyls is the trademark of Detriti and a special mention deserve the covers‘ graphics and the teaser videos: monochromatic xerox images get mixed with glitchy VHS footages, with the result of throwing the audience in the dustiest squat of 80s Berlin.

Autumns is the solo project of Christian Donaghey, from Derry, Northern Ireland, an outlet for electronic post-punk with a lethal pulse. After a brace of rough demos and without preliminary hype the project emerged fully formed on Karl O’Connor’s (aka Regis) illustrious label Downwards back in 2014, the youngest act in a new vanguard of artists that included the likes of Tropic of Cancer, DVA Damas and Marshstepper.

Preceding releases for Clan Destine Records and Downwards have seen the project engaged in a rough trade of transgressive noise, dysfunctional metal dance and DIY punk angst, yet each of these milestones has represented a different proposition. 2016’s ‘A Product of 30 Years of Violence’ saw the project moving into vast glacial spaces after the propulsive industrial discord of 2015’s ‘Das Nichts’ whilst both releases displayed a marked sense of transition from the lurid and engulfed fidelities of the ‘Terrible Tuesday’ Downwards Mini LP the previous year.

Alongside progressive appearances on cult labels the project has developed a notorious live show on the back of support slots for The KVB and a US tour which saw Donaghey share a bill with Lust For Youth in San Francisco. The performance of a desolate live score to David Lynch’s ‘Twin Peaks: Fire Walk With Me’ at the Distorted Perspectives festival, an acclaimed collaboration with renowned techno experimentalist Samuel Kerridge at the 2016 edition of Paris Fashion Week and a string of UK & European dates throughout 2017, performing alongside the likes of Beak>, Silent Servant & DVA Damas, have further cemented a reputation for uncompromising spectacle.

Following an expansive contribution to the Downwards label compilation ‘The Immortal Eye’ in March of 2017, Autumns added to an already restless year with his remix of JT Whitfield’s ‘Reclusion Talks’. 2018 shows Donaghey’s ouput retaining traction, releasing both original works and remixes, with a debut EP on Berlin’s, AMOK Tapes, a remix of Unhuman on Strange Therapy Records, as well as a return to Carl Clan Destine’s imprint and a number of live touring dates throughout the year.

Dusty Idols is a dance floor oriented electronic project from Italy, now Berlin based, formed in 2013.

A 12” is expected to be released in 2019.
Unreleased tracks will be played live for the first time.
BOMMA approved!

FraKtur is a DJ / producer from Nantes who experiments with aggressive and fast but also atmospheric and melodic techno styles. Besides being inspired by artists like Tim Tama, Nico Moreno, I Hate Models, Animal Holocaust, NTBR, he draws inspiration also from metal, post rock bands and atmospheric music.

Imperial Black Unit is an EBM / Industrial technoïd duo formed by Lapse of Reason and Templer in 2017. Their sound is characterized by a blend of early EBM/ Industrial vibes with today’s sensibilities.

By using an anti-establishment attitude and militaristic esthetic on top of hard rhythms, screams and sharp synths, they create an intense fusion of the past and the present.

Herzschlag is a Berlin based event / party organization born in 2014, bringing the finest selections of Cold Wave, Post-Punk, Minimal Synth and EBM.

Herzschlag greets every sound emerging out of the dark, industrial, future-noir, technical dystopia.
Resident DJs are Jaakko and Hanzel.