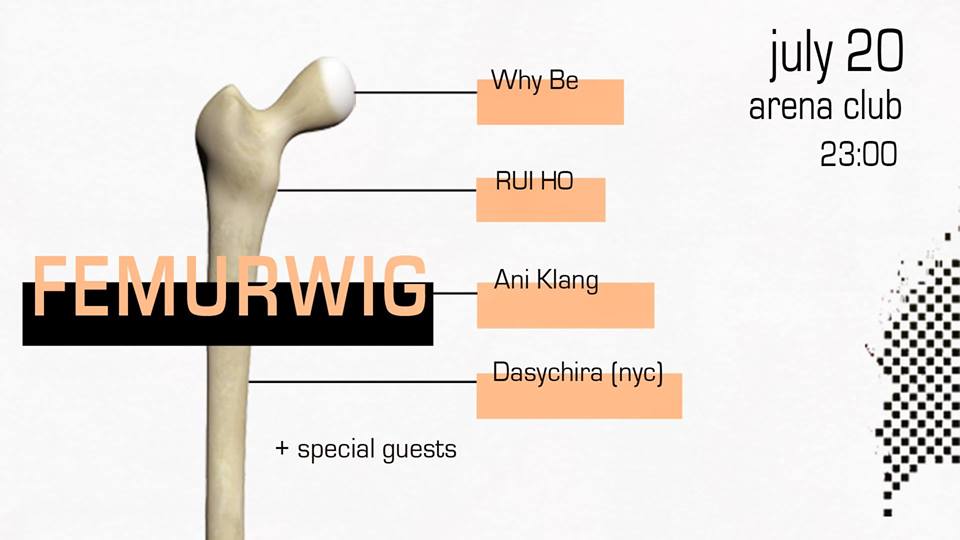 A celebration of the vortex of club genres bubbling to the surface in Berlin, NYC and Paris.

Come melt your mind and flutter your femurs on Arena Club’s main floor as we fuse the fiercest underground sounds.

Danish artist Why Be views electronic music as a potentially destructive force against the status quo, and does almost nothing conventionally, from his DJing to the way he releases music. His footprint so far consists of a series of off-kilter, sometimes abrasive mixes, plus bootlegs and unofficial edits released „virally,“ as he puts it.

Why Be’s music is a chaotic confluence of styles. House, ballroom, Jersey club, ambient and noise all have their place in his DJ sets.

Dasychira is a South African artist based in NYC. Currently touring their second EP, Haptics, Dasychira explores their relationship with physical and digital avatars as a means to reveal internal fantasies and vulnerabilities. They are a close musical collaborator with New York artists Embaci and Haleek Maul and a core member of east-coast collective UNSEELIE.

Dasychira released Haptics on Blueberry Records on May 4th, 2018, and has since performed live in New York, Amsterdam, Montreal, Vancouver, and Toronto.

Ani Klang is an experimental club music producer and DJ hailing from New York City but now living in Berlin. Her fast-paced, genre-bending dance tracks have caught the attention of labels like Infinite Machine and Knightwerk, the former of which released her Debut EP “Worst of All Time” in September, 2017. Her second EP “RAPACIOUS” was just released on Knightwerk in June 2018 and featured remixes by Playplay, Recluse, Fleksor, Tone Ra and more.

Ani’s live sets are a fluctuating blend of noisy club music, bass-driven footwork/160bpm beats, and hard, textural techno. Her signature energetic club tracks infused with avant-garde sound design, hammering drums, and bursts of demonic, distorted samples from around the globe have established her as one of Berlin’s most promising up-and-coming experimental producers.

The Berlin based Chinese producer and artist RUI HO makes electronic music that bridges the modern club music influences with traditional Chinese sounds. Their sound has been influenced by a wide range of club genres including R&B, Grime, Jersey, Reggaeton, Trance, Hardcore, etc, combining the intensity of club sounds with sweet and refreshing melodies from their past and present.

After releasing a single Ru Meng Ling and a remarkable debut EP Tales 戰記 on Shanghai imprint Genome 6.66 Mbp, RUI HO has been making buzzes with emotive and playful DJ sets throughout the Europe experimental underground scene as well as in their hometown China. The second EP of RUI HO : Becoming is An Eventful Situation was released through UK Imprint Objects Limited on the 23rd of March, and it has gotten positive feedback from Resident Advisor, DJ Mag, Mixmag and The Wire.

Elli is a North American artist based in Berlin. Although usually focusing on visual art, such as a recent video for Dasychira’s EP “Haptics“, their music is synth-heavy and electronic. Elli’s songs are often based off of short fictitious stories of their own, and you can hear this through their few atmospheric songs.